Play was about six 20 years old soldiers who have been killed in an unnamed war. Their comrades dig a mass grave. But when they laid their bodies in an alphabetic row, the six dead soldiers stand up! They tell that they don’t want to give up their lives they’ve barely begun to experience and refuse to be buried. 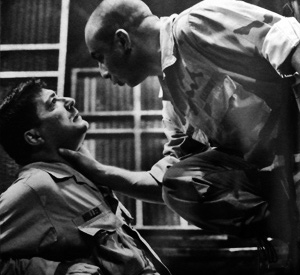 We went to see the “Bury the Dead” by Irwin Shaw with two of my friends yesterday.

I don’t know whether it’s because I haven’t seen any expressionist drama before or it was just a sloppy implementation of the original, it felt like a hundred minute long constant pain. I’m no expert in theater, but I still suspect the latter.

According to Wikipedia, play was Shaw’s first and written in 1936. What we saw yesterday was looked like a heavily modified version with more modern clothing, armament, stage, lighting etc. Although the whole play was full of symbols; messages were too direct and the translation of the script was almost soulless.

Play is presented at the Cevahir, I suggest you to stay away from it.

It's not Ralph who wrecks it!