Well, after the article I’ve just read on the NewScientist blog “One Per Cent”, it’s not really a question for me anymore. I believe it can. 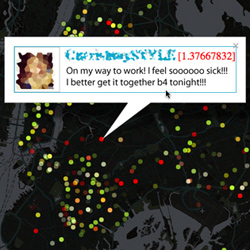 The article I mentioned is about how Twitter data is being used to predict a single person’s chances of getting caught by flu. According to the article, researchers analysed 4.4 million tweets tagged with GPS location data from over 630,000 users in the New York City area over one month in 2010. They used a machine-learning algorithm to tell the difference between tweets by healthy people – who might say something like “I am so sick of this traffic!” – and someone who is actually sick and showing signs of the flu. After their analysis, they were able to predict when healthy people were about to fall ill -and then tweet about it- with about 90 per cent accuracy out to eight days in the future. That’s quite impressive!

Do you know what was the first thing came to my mind while I was reading that result? The data mining experiment carried out by Target, for pinpointing their pregnant customers (a must read, by the way).

It wouldn’t be so hard to use a similar approach here and take advantage of the publicly -and, might I add; also freely– available data for marketing purposes. If you can spot a prospective patient several days in advance of his/her illness, that information clearly gives you the opportunity of mentioning him/her in a tweet like this one at the time when he start feeling his very first symptoms; 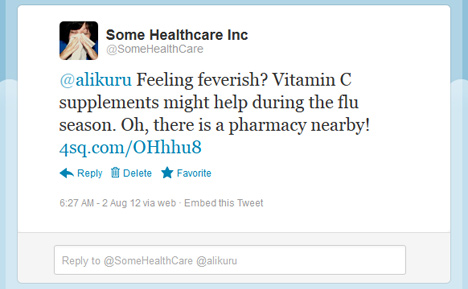 Is he feeling feverish? Indeed he is; 90%. You can replace the vitamin C/flu with any relevant condition and product/service combination; as long as there is enough tweet to feed the methodology, it should work. Lastly, we can discover patient’s whereabouts from the location data embedded in his most recent tweet. So, why not point him to a pharmacy? Or, to a health center? Where he can enjoy a carefully crafted Foursquare special discount for his check-in :)

Now, although this sort of targeting has the potential of proving itself very effective, it also has another aspect: it might spook your customers out. In fact, that was exactly what Target experienced on their first attempt to reach out their pregnant customers. When they started sending catalogs with a “Congratulations on your first child!” note attached to these customers, because they’ve never told the company about their pregnancy, it made them uncomfortable.

But, I believe method has space for fine tuning. Target perfected its method with sending out specifically designed catalogs with baby ads looking random. Since people usually don’t consider flu like conditions as private as their pregnancy, it might be easier to find a smoother way for this one.

Anyway, because using publicly available data from social networks has a potential of rendering conventional methods obsolete, I have a feeling that we’ll see scenarios similar to what I’ve described here more often in the future.

Probably more often than anyone of us ever want :)

How to modify backspace behavior of Firefox on Linux