I’m a long time HTC Touch Diamond user, and the phone I’m using now was already SIM-unlocked when I bought it. Recently, I had a chance to grab another one for real cheap from eBay for a friend, which was locked to Orange. Since we don’t have Orange here in Turkey, I’ve started a search for ways of unlocking the device. 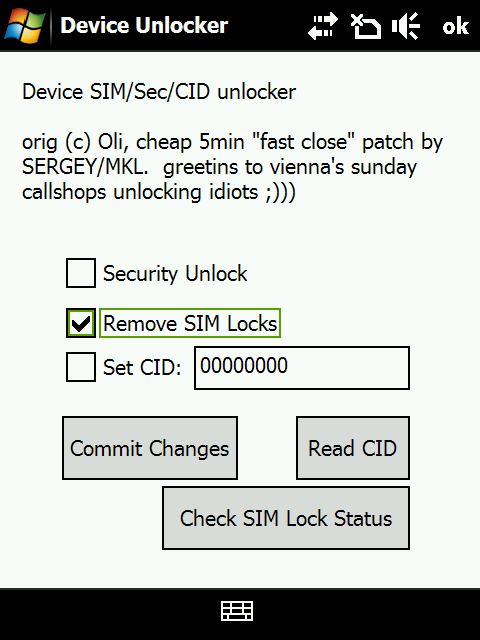 Below is the method I used for unlocking my new Diamond. If you don’t want to use the overpriced unlocking services that certain web sites offering, you might find this free alternative useful ;)

It’s a three step process involves flashing. Please DO NOT use this method unless you understand and accept the risks of flashing your phone, which can brick your device if not applied properly. Also the process will hard reset your phone, which means you will loose all your personalized data on your phone’s memory (such as your contact list), so better back-up first. It may be a little time-consuming, but trust me, a backed-up phone is better than no phone and no data.

Here is the unlocker archive: HTC Touch Diamond SIM-Unlocker. Download and extract it to an empty folder. Establish an Active Sync connection between your phone and your PC, and proceed to the steps described below.

Normally, vendors limit the devices they produce to only use the software created by themselves with a mechanism called “CID lock”. In this step you are going to flash your phone with an “Hard SPL” which will allow you to bypass the CID lock and install firmwares that has not been approved by HTC.

To make your phone open its gates for homebrewed firmwares, navigate to the “STEP 1” folder where you’ve extracted the unlocker archive and run “diamond-sspl.bat”, then follow on screen instructions.

It will prompt you to copy JumpSSL.exe and SSPL (which is “sspl-1.01-reloc-mod.nb” file) to your phone’s root directory, when necessary. It will also ask you to “execute SPL now” after those copying steps. Just click any key on your keyboard and program will run the SSPL on your phone’s screen. Your screen will turn black after you tap “continue” on your Diamond, then your phone will restart.

After the process finish, you have to jump to HardSPL-1.24 sub-folder and run “DiamondCustomRUU.exe” to flash the Hard SPL.

Here is an excerpt from XDA Developers forum post describing what does radio mean when it comes to PDAs;

The radio stack is responsible for the phone functionality of the device. This includes GPRS, GSM, UMTS, and GPS operations as well as camera functionality.

Because the official radio, which your phone ships with, prevents altering the SIM lock, we need to replace it with an unofficial one in this step. To do this, just navigate to “STEP 2” folder and run “DiamonCustomRUU.exe”, then wait for it to complete the process.

This is the last and the easiest step of the process. Just copy the “DiamUnlock.exe” from the “STEP 3” folder to your phone’s root directory and run it on your phone. First mark the “Remove SIM lock” check box, then press “Commit Changes” button and you’re done.

Note: DiamUnlock.exe you’ll find in the archive above is not the original one. Original unlocker was really hard to execute because its coder put a nasty joke in it, which closes the application less than a second after you run it, giving very limited time for checking the “Remove SIM lock” tick box and pressing the “Commit Changes” button afterwards. Archive in this post contains the patched version that does not close itself after its execution (thanks to sergeymkl from GSM Hosting forum).

If you still want the original one, here it is. And a usage tip for this unpactched version: Try selecting the “DiamUnlock” icon on the programs menu first, then position your stylus on the screen around the supposed location of “Commit Changes” button (you can use the screen shot at the top to figure its position). After that, hit the center circle button on your device twice and tap the screen with your stylus. I was able to catch the program after 15-20 tries :)