I got an invitation to Ginx recently, and want to share my thoughts about this new Twitter front-end, a webware which is currently in “pre-alpha” status. 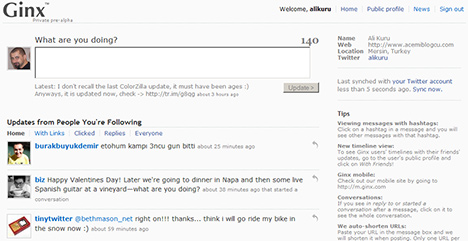 What makes Ginx attractive is that it handles conversations in a threaded fashion. This makes easier to track people’s replies to each other, hence improving overall Twitter experience. Ginx has another usability feature which is about shortened URLs; it automatically converts shortened URLs to longer ones for preview, you don’t need a browser addon or a user script to do that. It also adds target web pages’ favicons next to the links and, especially if the link is pointing to an image, creates thumbnails (unfortunately, Ginx only takes care of the first one if there are more than one links in the tweet).

System also converts your long URLs to shorter ones while you are updating. Most beautiful part about this conversion is you don’t need to think about the 140 character limit while typing, since Ginx only adds shortened URL character count in the total! Just trust the counter, they say :)

Ginx is handling hashtags internally, too. #Hashtags are clickable and every hashtag has its own dedicated timeline in Ginx. 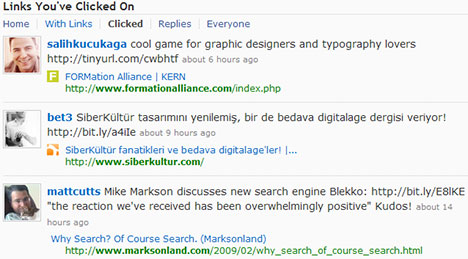 Although Ginx is not interested in your favorites at the moment, it remembers the updates of your friends which you’ve clicked the included links, and lists them in your “clicked” tab on your Ginx home. This is awesome if you have a fishy memory like me, it makes it really easy to find the links you were interested in, and in my opinion it is better than Twitter favorites.

These are the details that makes you feel the front-end offered by Ginx is more “complete” than any other tool. But there are some other things that make you feel “incomplete” about it, too. Such as;

Twitter is saying that their API traffic is twice as much as their web traffic. Meaning; most of their users are connecting the service through third-party tools. This also indicates that how strong is the competition between Twitter API developers.

As I stated in the beginning, Ginx’s status is currently not even “alpha”. Everything can (and probably will) change till they reach a stable release but, even in this initial stage, Ginx is distinguishing with its clever features, and it is obvious that it is not just “yet-another” Twitter front-end.

Want to get invited to Ginx? Reply to @ginx, and make sure you are following them, so they can send you a direct mesage with the invitation code. Don’t forget to give your feedback, they are listening :)

Lost: This Place is Death